Vince was our saxophone player in the second version of the Nitecaps. 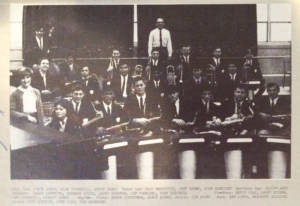 Knowing Vince was such a great player and a very fun person to be around, I approached him to come check us out. He did, and he liked the band, so he joined up.

Vince was great player and had no problem doing dance steps – he fell right into it. Our new horn section was made up of Kevin Marcy and Vince Lopez. Phil Salgado returned eventually, and when he did, we were back to three horns, but that would be about a year down the road. In the meantime, we had gone from three horns to two, but it helped that Vince played both alto and tenor saxophone – we did have to make some changes to the arrangements, but it worked out just fine as Vincent and Kevin were both great players. It’s interesting – when you’re in a group, every player’s sound and personality adds to the overall sound, and Vince’s ability to switch between alto and tenor really added to our timbres and flavor of the group.

By the time we were working with Kevin and Vince, were all getting a little older and becoming more experienced players. Vincent and Kevin gave us a very tight horn section and both of these guys came from a jazz background, so they could read charts, which really added to our ability to play more complicated arrangements. They both stayed with us until the group disbanded in 1969.

Vince was a great musician, dancer and a very good team player. He was definitely a good choice for the group.