The Nitecaps’ live act was something to see, and if you did see us back in the day, you certainly remember what it was like to hear the band. From the Wutzit Club to the Teenage World’s Fair, the battles of the bands and clubs throughout the Bay Area, the Nitecaps’ gigs were hugely popular and very entertaining.

We did play again in the 1980s for my high school reunions; I was amazed at the love we received at those reunions.

I’ll take a minute to talk about the dancing because it was such an important part of our shows, and I believe that our dance choreography was what allowed the Nitecaps to win so many band battles.

Our dance routines were extremely good. We brought so much more to the stage than an average band of the time did. We were way ahead of our time – much of what we were doing had never been seen before. Break and street dancing had not happened yet, but we were doing many steps that would become commonplace when those themes became popular.

Long before the boy groups of the 1990s, we were extremely well-rehearsed and spent hours dancing and working out moves. In fact, we were doing steps beyond even what the groups of today are doing. Quite often, when the guys were doing steps, girls out in the audience would stand in front of the stage and try to duplicate our dance moves. We loved that, and you could always see that it wasn’t that easy for them do. We had a lot of tricky dance moves and we were always trying to figure new ways to bring them to the stage.

On top of the dance routines the guys where doing, I took the dancing a step or two further. I spent countless hours developing my dancing skills. At first I was copying moves that I saw James Brown do, but that was a stepping-stone to my own style. I became extremely improvisational on stage with my dance moves, and I loved that every moment was an opportunity for spontaneous thoughts of what I would do next. 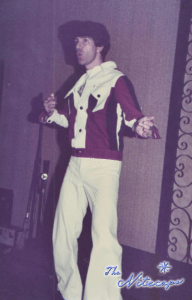 I know I was in great shape from all of the dancing – trust me, dancing with that energy is an aerobic workout to the highest degree. When playing shows, I could dance through the whole night and it never fazed me whatsoever, because the choreography really kept me in shape. Just like anything that a person does a lot, after a while you come up with new ways and ideas of how to do it, and the more I danced, the more ideas and physical ability came about.

I could do all the James Brown stuff like the splits, sliding across the stage on one leg, and all kinds of fast foot movements, but I had a trick – sometimes, I would throw a little salt on the stage in my dance area. That made the floor really slippery which made it easy to pull my legs together and apart, and that looked really good. I also had special shoes with leather bottoms. I would never wear them out on the street – they were only used for stage performances.

Dancing for me was always a very intuitive and creative endeavor. I never really took formal dancing lessons, but I was an absolute student of dance. I loved watching Gene Kelly, who I thought physically was one of the great dancers. I watched a lot of Donald O’Connor and Fred Astaire. Although I thought Fred Astaire was a great dancer, I always felt his dancing was a little more graceful than the more physical approach of Gene Kelly and Donald O’Connor. And then there’s James Brown – he was the start of all of it. He was the driving influence for us moving from surf music to soul music and I just thought he was such a creative force for that time in music.

It’s totally cliché is to say today because everybody can look back in retrospect, but we knew then that he was changing the face of music, and we had a great desire to jump on that bandwagon. 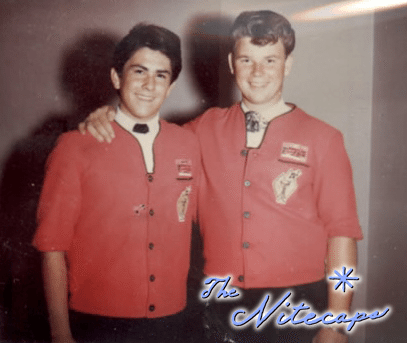 Larry and Phil wearing the Red Jackets in 1965

Back in the 1960s, bands used to wear uniforms, and we were no different. As a surf band, we started wearing matching outfits that were slightly different for each member. You can see the first of the outfits that we wore in the short bit of live video footage on the homepage; it was taken of us when we were very very young – 13 or 14 years of age.

Of course, the outfits evolved with the band – we started wearing red Nehru shirts that later turned into red jackets with a very cool martini glass stencil stitched onto the jacket. Both the red and blue jackets seen in the images on this page were worn during our soul band days.

It’s really fun to still have the original uniforms, but the magic is in the story of how we ended up with the clothing you see pictured on this page – it makes having them after all these years all the more special.

The uniforms were given to us by Larry Lunsford.

Larry had a terminal illness and he knew that his time was short. Robert Vallelunga, Phil Salgado and I would head over to visit him when we could, and it was at one of these visits that Larry had these suits ready for us. He gave each of us a jacket or shirt and explained why he thought we should have those particular items.

You can imagine how emotional that moment was for all of us – we all knew what these suits meant to Larry and more importantly, we knew what it meant for him to give us these suits. There could not have been a more poignantly appropriate gesture from Larry in the context of our friendship and life experiences together, and at the time, we were all smiles and joking and kidding with him. Inside we were all very aware of what was happening and were feeling it to our souls.

The suits are becoming more fragile each year as they hang in our closets; just knowing that they are there ties us to that glorious time in our lives and to our memories of Larry. It’s so hard to lose the friends you love after a lifetime of experiences, and to have a piece of them, a piece that represents what you shared, something that they wore with pride as they went to battle with you…it’s very, very cool.

Larry saved these jackets all those years, and now we can share them you.

The thing I learned when I had to get replacements for the original guys was that even when someone’s a great player, they may not necessarily be a perfect fit for what it was that we were doing.

To do all the dance steps and choreography over and over again, to have the tenacity to go over a song that you know perfectly but not everybody in the group collectively has it together yet…so you do it again…and again…well, that takes a special type of musician and human being who maintains a serious work ethic.

One of the things I’ve heard over the years from all of the guys was our work ethic really was uncommon. Honestly, even today, when I’m performing with amazing professionals that can read and play like nobody you’ve ever seen or heard before and I pay them to do the rehearsals. Even THEY don’t have the work ethic I’m talking about.

With the original group, we developed that work ethic together, so we all bought in completely, but finding replacements that were willing to engage at that level was a challenge, and when we did find people willing to give it a go, they soon discovered that it was a little harder for them than expected.

To find this in such young kids, remember we were awfully young when we started. Like everybody else our age, none of us were able to drive yet, so we had to walk, take the bus or have our parents drive us to get anywhere.

Johnny Labum and Phil Salgado lived on the other side of town from where we rehearsed which was in my garage; it required them to take 2 different buses and transfer from one to the other to make it to my place. And this was right after school for them. Their parents would pick them up and take them home but that’s what they had to do to get there, and they did it regularly 3 times a week.

Looking back, it’s amazing that they had the dedication to go through that, especially as the practices themselves could be both intense and repetitive. It paid off, though, as the dedication to rehearsal is clearly why we won so many battles of the bands.

Now, my work ethic was learned from being raised by grandparents who were hard workers. My grandmother was born in 1906, and my grandfather was born in 1904 – these people understood what hard work was and what it took to succeed. They instilled that drive in me, and it’s a trait that I carry with me to this very day.

In the beginning, I think all of the guys just really loved playing as much as I did. The rehearsals were work but they were also a lot of fun. We all liked to dance, we all loved music and we all had ‘one mind’ in one direction. When we started to get replacements, however, I could see that the ‘one mind’ work ethic wasn’t quite the same in the new guys.

All of our replacements were great, but not all of them were used to practicing something over and over and over again, but we needed it; there’s a lot more to performing dance steps while actually being able to play your instrument accurately at the same time than one would think.

I took so much for granted with the first group of guys that as I started to work with others, I saw why the original group was so magical.

Fortunately, though it took a little time, I did find it in the second group as well. Johnny Diaz, Butch and Bob Martin already understood what it took, and their cousin Rick (later to become Ian Stone) had gone through so much adversity in his personal life that he had no problem working harder than anybody. Kevin Marcy and Vince Lopez, luckily, were cut from the same cloth, so after a short while we had it all together. The group was still magic, and we were still winners.

As for me – winning all those battles of the bands defined me for the rest of my life. It taught me how to be a good sport when you don’t win, it taught me that you CAN win and most importantly, it taught me what it took to be a winner.

I’ve never had a platform to be able to tell everybody this in such detail, and I’ll say it now – I’m awful thankful for those days.