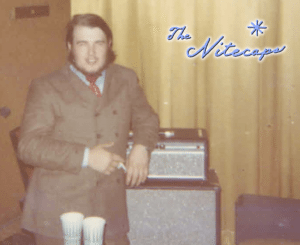 My Memories of the Nitecaps

For me, it all started when I met both Johnny Diaz and Jim Bruno at a Music Camp at the University of Nevada in Reno.

Little did I know that I would be friends with Jim, Johnny and the rest of the guys in the Nightcaps right up to this very day.

This is kind of a funny story though, because all the time we were making the music, we only knew each other by first names. Jim and Johnny did not know what my last name was, and that particular summer I was in more than one music camp. I was in the Reno Music Camp for one week and went from there to another music camp in Lake Tahoe for two weeks and then from there back to San Jose. I was staying in San Jose State dorms where I went to the Stan Keten Jazz Summer Camp.

Now, it was fun to have met Jim and Johnny, but I really didn’t think much more about it after I had left them in Reno. Three weeks later, I’m in a different music camp in San Jose and all of a sudden I hear a knock on the door. In walks Jim Bruno, yelling, “Is there a guy who plays trumpet named Kevin?” I looked up and said, “That would be me.” I had just flopped down on the bed when he come knocking at the door.

Jim’s first words to me were, “Want to join a band?” My answer quickly was, “Yes, why not?” And that’s how it started.

So, the very next day I was whisked away from the music camp to my first Nitecaps rehearsal. I knew from the beginning that I liked the Nitecaps and that being in the band was something I truly wanted to do. I became the new trumpet player for the Nitecaps that day, and that was to be the beginning of a lifelong journey of musical adventures that continue to this day.

One of my fondest memories was learning how to dance and do the dance steps that the band did in various songs. One memory was learning how to do what was called the “temptation walk” – it took me all rehearsal to get the hang of what it was like to do that particular step and play at the same time. As time went on, I really did get the hang of that step, and many more, and learned how much fun it really could be to both play and dance in a show band.

Truly, the Nitecaps was a show band. We spent a good part of our rehearsals working out choreography, having sectional rehearsals for the horn and rhythm sections, and then we’d put it all together.

Now, bands put together song lists, but we’d take it a step further. We’d actually memorize our song lists, and everyone was responsible for knowing them. We had everything worked out in sets – combinations of medleys and even little drum fills between songs. Add to that the choreography that we were doing to every song as well, and it was quite a task.

We would work on these sets and if anybody goofed, we would have to go back to the beginning and start all over again. We were having a lot of fun, but we were extremely serious about what we were doing and we were truly perfectionists when it came to every aspect of the show, from dancing to clothing to what the right songs were in the sets.

Another one of my fondest memories is about another member of the band. His name was Rick Panell, a cousin of Butch and Bob Martin. At first, Rick came in as our keyboard player, and from there he asked if he could sing backup vocals. Rick eventually sang some lead vocals, a skill which would evolve when he joined another group later down the road where he became an amazing lead vocalist.

I have fond memories of all the wonderful places that we played. One of my favorite gigs was playing at the Cocoanut Grove. The Cocoanut Grove in Santa Cruz, California, is very famous to this day. It is right on the Santa Cruz Beach Boardwalk and when you’re in your young teen years and you drive to Santa Cruz to play on the Boardwalk – well, it really doesn’t get much better than that. Also, the Cocoanut Grove itself was a great venue: the stage was awesome, the dance floor was awesome, and there was a second floor that was always very crowded. When I say crowded, I mean that a lot of that crowd was female. I had no problem with that.

After the Nitecaps, I continued on in music in a group called the Loose Ends, a name that was later shortened to just the name Loose.

Loose was one of my favorite all-time bands; we were together for about three years, and during that time the performances that we played were all fantastic – everything came together. We were getting older and better as musicians, and we just had an all-around good time. Musically, we truly evolved.

From Loose I went into a group that continued on up into the 1970s. The name of that group was 1843, and we were well-known back in the day. We played mostly nightclubs; a notable was a club called Dangerfield’s.

From there, through a connection from Jim I found a new musical home for quite a few years. The name of that group was Sangria, although most of the members came from the group The Barons of Soul, one of the many bands that we knew from back in the Nightcap days.

Sangria was a great band and quite large over a period of 20 years – sometimes we were a 9-piece, and sometimes even a 10-piece band; 4 horns (the horn section also sang back up vocals), bass lead guitar, drums, keyboard, lead vocalists, and at times even a female vocalist. We had many, many wonderful musical adventures. In the 1980s it even branched out as many of this musicians in the group became lead vocalists as well – it really was quite a thing.

From there, I joined a group called Touch of Class, another very well known Bay Area group with a large horn section and great lead vocalists.

The music has never stopped for me and has been, to say the least, a very important part of my life.

The other important part of my life is my family, which consists of a wife of 33 1/2 years and children who are now grown adults with children of their own: my grandchildren. I have four grandchildren ranging from 4 months to 6 years of age.

I have to say – for my life my inspirations are truly the music and my love for my grandchildren. Those things have kept me alive and I am extremely thankful.

My Memories of Kevin

During my junior year, I competed with my high school jazz band at the University of Nevada’s Jazz Festival. I had a guitar solo in one of the songs that we played, and actually won best guitar solo at the jazz festival for that year.

That got me a summer scholarship to the University of Nevada’s Jazz Summer Camp. Both Johnny Diaz and I attended.

One of the first things that happened at the camp was that the teachers listened to each student play. Afterwards, we were asked musical questions and asked to sight read a couple of charts; it was kind of a quick evaluation of where we stood in our particular abilities.

From that evaluation/audition, we were placed in both a big band and a small combo. Those would be the bands we would be working in throughout the week at the music camp.

Johnny and I were both put in the same two bands which of course was cool, but the rest of the kids we had never met before. Now, understand that these were all kids our age but from all over California and Nevada.

The big band Johnny I were in was somewhere around an 18 piece band. The first trumpet in our big band coincidentally was also from San Jose (not from Lincoln High School, though); he went to Campbell High School and he was a sophomore that year. I was a junior and Johnny was a senior, so he was a bit younger than us.

That trumpet player’s name was Kevin Marcy and that’s how we met. From day one, Kevin was both a great player and fun person to be around. Kevin could play those big high screaming Maynard Ferguson/Tower of Power-type notes. Pretty inspiring. Little did I know it then, but Kevin was to become the new trumpet player in the second version of the Nitecaps.

Johnny, Kevin and myself all became great friends at that music camp. Kevin and I even snuck out one night from the dorms we where staying at. The dorms were, of course, at University of Nevada. We snuck out and went to downtown Reno to see the Ink Spots in one of the casinos. That was an incredible musical experience right there.

I feel very fortunate that I had the opportunity to see them, and that’s a fondly shared experience and memory of my time spent with Kevin.