Please check out a list of my Internet Radio Stations @ TheRobertThomasGroup.com. The ‘Thomas’ is my business partner, Kevin; he designed the Websites and Icons, and I am the ‘Robert’ (we used our middle names) – I created the music formats. Still thinking about the old days, the GREAT days..

Fond Memories of the Nitecaps

One night we played out of town somewhere and played Hide & Seek at night in a golf course that was adjacent to the house we stayed at. Unbelievable fun!

Another night we played Fort Ord and spent the night in a cottage on the base. We got some booze, drank too much and before we passed out one of the guys (?) decided to relieve himself in the oven. I only remember how bad it smelled! 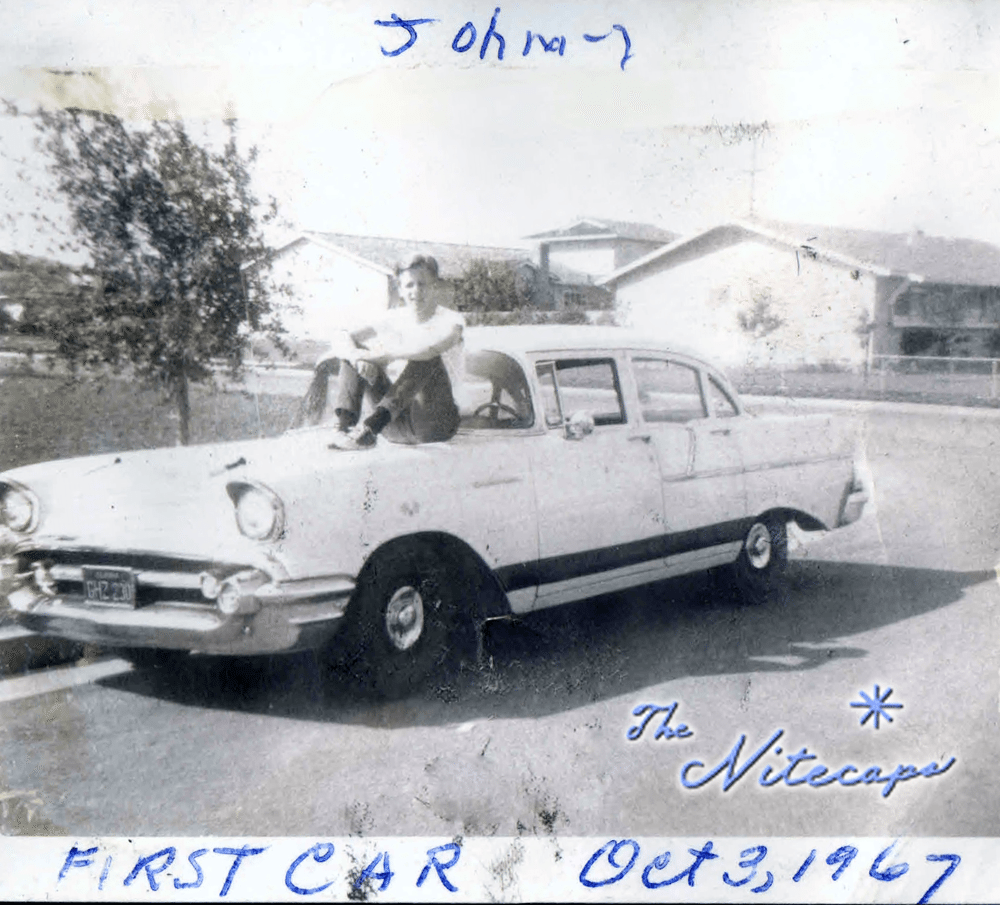 Most of us packed into an old Dodge van and traveling from San Jose to Gilroy, headed west over the hill to Watsonville. At last, we were on tour and on the road! Ha. Some kind of tour.

We were so inspired when we were all about 14 or 15 years old and saw the James Brown Show at the San Jose Civic Auditorium. We were too young for cars so we all walked a long way and talked about what a great show we just experienced.

I remember hitching a ride home with Phil Salgado from Phil’s mother who obviously had had a rough day and she said, “You know there’s more to life than just the band.” Oh yeah? Not for Phil and me at the time.

Another memory is waiting for the band to show up in 1964 at the Santa Clara County Fairgrounds. Our first fair show and my first cigarette. Yuck!

After those fun and exciting days with Nitecaps in the 1960s, I chased my dream of becoming a radio DJ. Through the years, those dreams were realized by working as a DJ at various California radio stations. In 1980, a partner and I opened a business in Fresno that we called VW Restoration that specialized in restoring and selling stock VW Bugs. We later opened parts and service facilities with a second location in San Jose. We sold our company in 1990 but continued to buy and sell all kinds of vehicles. In 2005, l moved to Las Vegas and started a business called Squatter Alert. It was a service company desperately needed by people who were searching for squatter removal help. Because of unfavorable laws at the time we found it to be nearly impossible to remove squatters from private properties. For this reason, we chose to close the business. Laws against squatters have since improved.

I am now retired but am very involved in Internet radio. I have 4 stations on the air right now:

Today, I’m a happy single man with nice cars, the fastest (Sea-Doo) jet skis on the planet, a fantastic home with a pool and multiple Las Vegas city views. Although it’s not always been rosy, I’ve had a good life. For this and more, I say God bless America!

Johnny was also a very early member of the Nitecaps, and my memories of Johnny are that he was super talented and extremely ambitious. I’m talking about a really good saxophone player for such a young age. He could play lots of cool things like books Boots Randolph-type style (Boots Randolph “The Yakin’ Sax Man,” for those that are familiar), and Johnny’s version of “Harlem Nocturne” was killer; he really added to our group from the moment he started playing with us.

We met Johnny in a very different way. We had a manager by the name of Jean Cory, and Jean booked all the talent out at the County Fair. She was very connected to other bands, dancers, and entertainers of all sorts, and since we started off as a surf combo (we were a 4-piece group), we were already playing pre-fair shows before Johnny joined the group.

Jean would drive us around because none of us were old enough to drive. As we were coming back from one of our performances, Jean mentioned to us that she knew a young man who played great saxophone was extremely good-looking and thought that he might be a really good fit for us.

Johnny had been the leader of his other band, so the idea of him leaving his band and joining ours seemed crazy, but that’s what happened, and wow! What a lucky break for us! Johnny was everything that Mrs. Cory said he’d be and so much more. I always felt that Johnny had the soul of the leader, and I know that I have the same driving force in me.

Now, that could have been a problem, but from my point of view, it never was. It actually worked out great. As the horn players came into the group, Johnny took command of the horn section beautifully. He was a great leader, and Johnny was so good at music that he would figure out all of the horn parts and work those out with Phil and Bob Martin.

As he got the horns together, I would figure out all the rhythm section parts and share those arrangements with the rhythm section guys. Between the two of us, I think we had a really great winning combination; we were like the two section leaders.

You know, with YouTube and such an amazing access to information, people take much of what we did back then for granted today. We didn’t have all of those resources; we had to listen to 45 records and pick the photograph needle up and drop it in various places on the record to learn the song. To make it harder, the quality of the records and sound systems we were listening to were archaic compared to the recordings and sound systems we have today.

No, it was like the Wild, Wild West back then – we had to figure things out on our own. We did get some help from Dave Daly, but Dave wasn’t there all the time. Dave gave us a really good head start and from there, we had to take the bull by the horns ourselves.

Johnny Diaz was always so great as a drummer that nobody had to show him anything; from day one, Johnny could listen to those records and play all of his parts beautifully.

For our shows, our standard intro was to have the band play one or two instrumentals before I would be introduced to come out and sing. Johnny was the person who always announced me when I came out, and he always made me sound great, which really added to the excitement of the show.

I’ve said that when you’re hanging out with your friends extraordinary things become the norm and you start taking things for granted, but we recognized that all of these factors where part of the winning formula we had.

One last thought about Johnny – Johnny was very interested in being radio disc jockey, even in his early high school days where he was the DJ for his high school radio station, and if you look at what Johnny went on to do, you’ll see that he accomplished his dream in a big way.

We were very lucky to have Johnny LaBaum as a member of the of Nitecaps.

By the way…thank you Mrs. Cory, wherever you are!